From a historical perspective, the 1920s marked an exceptionally exciting period in art, architecture and urban development.
Cornelis van Eesteren (left) had the good fortune to be in the right place at the right time. As a student at the VHBO architecture school in Amsterdam, Van Eesteren was awarded the prestigious Prix de Rome architecture prize in 1921, affording him the means to make a tour of Europe. Among the cities he visited was Weimar, where he met Theo van Doesburg (right). Fifteen years his senior and already an established name in the artistic avant-garde scene, Van Doesburg introduced the young Van Eesteren to the abstract formal language of De Stijl. 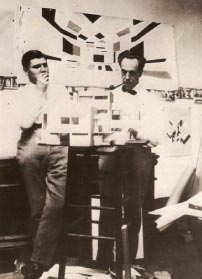 One of the group’s initial founders, Van Doesburg was also the editor of the eponymous magazine De Stijl and the movement’s leading mind. Its ambition was to develop an interdisciplinary form of art in which painting, sculpture, design and architecture would complement and reinforce each other. Besides the Van Zessen House,
Van Eesteren and Van Doesburg also worked together on
Van Eesteren’s graduation project of a design for a university building (on the wall behind them in the photograph). Both of these designs were displayed at the 1923 exhibition on De Stijl in Paris as well as designs for three imaginary dwellings, known as the Hotel particulier, Maison particulière and Maison d’artiste.