In 2017 it is 100 years ago that the magazine De Stijl was founded. In The Netherlands this calls for a celebration. The artist Theo van Doesburg is editor in chief. He made the design with the colours red, blue and yellow in the Van Zessen House. Also, there is an exhibition on De Stijl in the House. West Kinderdijk 89, ALBLASSERDAM. Open by appointment: contact@huisvanzessenalblasserdam.nl, www.huisvanzessenalblasserdam.nl.

The Van Zessen House will be open in the new year not only by appointment but also on a number of fixed dates. This year we will participate in the following events:

In November 2015 we organised exciting workshops for middle schoolers together with ‘KunstKanjers’. The children built models of the Van Zessen House and they could build their own dream house. In the pictures you see them with their work.

MONTH OF MAY, MONTH OF CYCLING
Within a few days the month of MAY starts: Friday 1 May 2015.
You can make an appointment for the cycle tour. For further details of the arrangement including cycle route guide see the annual programme 2015.

It was a big success. On Friday 27th of February 2015 approximately 20 children followed the workshop in Cultural Center ‘Landvast’ in Alblasserdam to conclude a series of workshops. Alderman Dorien Zandvliet distributed certificates to all participants. The project ‘KunstKanjers’ aims to familiarize children with art, such as painting, sculpting and making music. 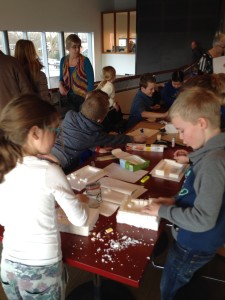 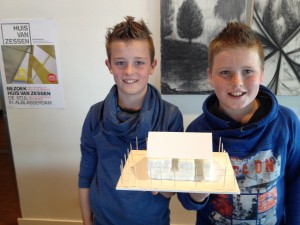 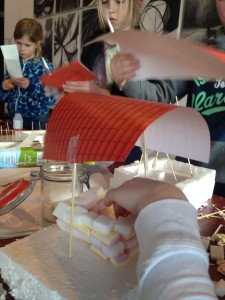 The Van Zessen House will be open in the new year not only by appointment but also on a number of fixed dates. This year we will participate in the following events: 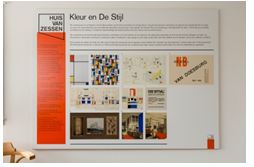 During the Museum week the van Zessen House is open on
Saturday 18 April. It will be the first time that we participate in this event and therefore we have a surprise in store for all visitors. 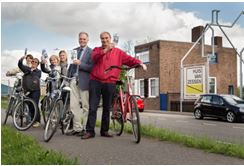 Meimaand Fietsmaand (Month of May, month of cycling)
Month of May (package by appointment)

Fancy a day with the wind in your hair? Cycle onto the dykes, into the polders, and look at the famous polder windmills. The cycle route
van Zessen House – Alblasserdam – Molens (windmills) Kinderdijk is the ideal guide along the way.

Especially for  Meimaand Fietsmaand  the cycle route booklet is available free of charge in a  Package deal  including entrance van Zessen House, coffee, and cake and a sandwich lunch (€ 15.-).
Sign up through: contact@huisvanzessenalblasserdam.nl

This year The Fietsvierdaagse is once again a fixed part of the events whereby the van Zessen House is open to visitors. Especially for all participants lemonade and cookies are served at this stopping point. Sign up through: www.ronduitdordrecht.nl

The van Zessen House is ‘a must’ for all architecture lovers. The house was built  ‘architect-designed’, which means that it has quality. The architect and the artist working on it therefore were not of little importance: the architect and urban planner Cornelis van Eesteren became famous with the expansion plan of Amsterdam and the artist
Theo van Doesburg was one of the founders of the abstract art in the Netherlands: he was the leader of the artist group De Stijl.

During Open Monumentendag (Open Heritage Day)  invariably a lot of people from the area who regularly drive past the house at last come to have a look around in the van Zessen House. For normally you just do not get round to it!  This year once again the doors are open; everyone is most welcome!

This year’s theme is: Art and Craft, a subject which links up beautifully with all that the van Zessen House has to offer. The colors on the doors, window frames, the stairs and the ceiling in the hallway were made by the house painter commissioned by Cor van Eesteren and following the instructions of the artist Theo van Doesburg. 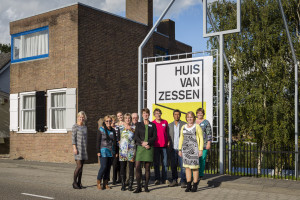 There is a special guided tour on Cornelis van Eesteren’s architecture journey on Open Monuments Day. The theme of the day is ‘Travelling’.
Van Eesteren travelled in Europe for a year and made beautiful sketches of famous buildings and townscapes. Part of these sketches is shown in a slide presentation in the basement of the
Van Zessen House.
The tour guides of the Van Zessen House will tell you all there is to know about the things Van Eesteren did during his journey and why the trip was so important to him. 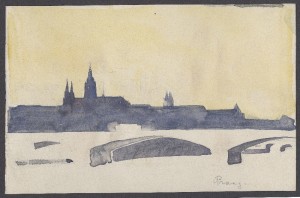 Special offer
Only during Meimaand Fietsmaand (May Cycle Month) the cycle route is offered in a Package deal including a free ticket to the
Van Zessen House, coffee and pastry and a sandwich lunch for only € 15,-

For more information on the program:
Fietstocht arrangement 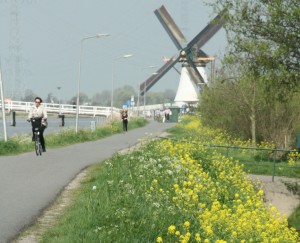 NICE CHRISTMAS ACTION FOR CHILDREN! 28 December 2013
In December 2013 the Van Zessen House organised a drawing- and tinkercontest for children. They could also collect ‘likes’ for the new facebookpage: https://www.facebook.com/HuisvanZessen.

Instead of the colouring picture you may also make a tinkering with paper or cardboard of your own dreamhouse. You can also collect ‘likes’ from family, friends and people you know. Write the names of the ‘likers’ down on a list.

The works and lists can be handed in on Saturday 28th of December 2013 between 10 and 12 o’clock at the Van Zessen House,
West-Kinderdijk 89 in Alblasserdam.

This action was sponsored by Ritmeester BV
https://www.ritmeester-bv.nl and
Brand BBA https://www.brandbba.nl.

The volunteers of the Van Zessen House paid a visit to their collegues of the Van Eesterenmuseum in Amsterdam. After a refreshing lunch in Theater café Mozaïek the trip went to the Van Eesterenmuseum which houses in a former school in West Amsterdam. The knowlegeable guide Leo Tjoelker showed the group the museum and the refurbished housemuseum in the style of the fifties. After that the group went for a walk in part of the General Expansion Plan for Amsterdam that was executed after World War II. 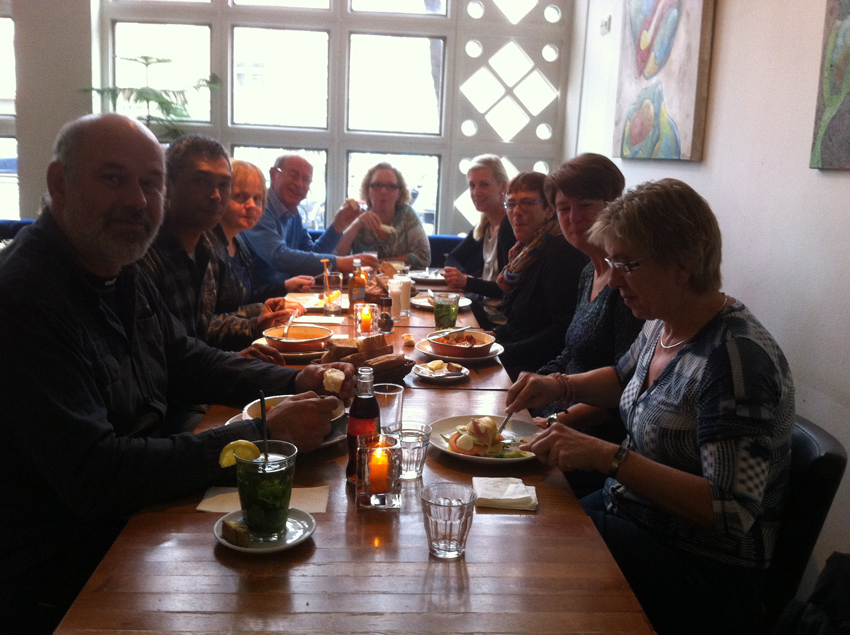 The volunteers of the Van Eesterenmuseum paid a visit to the Van Zessen House after a trip in a bus from the fifties. The day was interesting despite the heavy rain. The bus took the group to see places that played an important role in the life of Cornelis van Eesteren such as buildings he built or made plans for and the location where he used to live. A visit was also paid to the beautiful church designed by the architect Jan Wils with stained glass windows by the artist Theo van Doesburg.

OPENING INVITEES: Saturday 5 October 2013 voor foto’s klik hier
OPEN TO THE PUBLIC: from Sunday 6 October 2013
LOCATION: The Van Zessen House in Alblasserdam. In the
Van Eesterenmuseum in Amsterdam the same exhibition is on
untill 12 January 2014: www.vaneesterenmuseum.nl 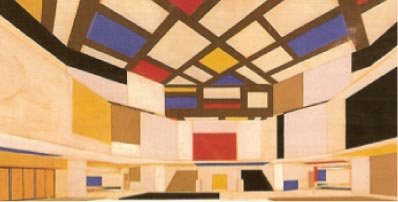 Celebratory opening of the double exhibition in Amsterdam and Alblasserdam on Saturday 5 October (for invited guests only).

The exhibition focuses on the brief but highly productive partnership between Cornelis van Eesteren and Theo van Doesburg over the period 1922-1923. From the time of their first meeting in Weimar, where Van Doesburg was teaching a course on De Stijl at the Bauhaus, to the exhibition on De Stijl in Paris in 1923, Van Eesteren and Van Doesburg were in intensive contact. Among their collaborative designs were the now legendary scale models of three imaginary dwellings. Today, the Maison d’artiste is considered an abstract spatial masterpiece.

During the Dutch national Heritage Day weekend, on 14-15 September 2013, the Van Zessen House will be open to the public on Saturday afternoon. Visitors can take part in a guided tour of the house. There is no need to book ahead and admission is free. 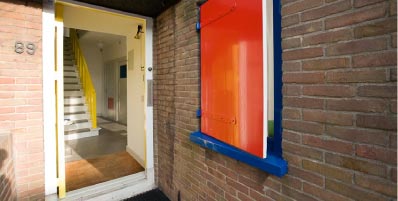